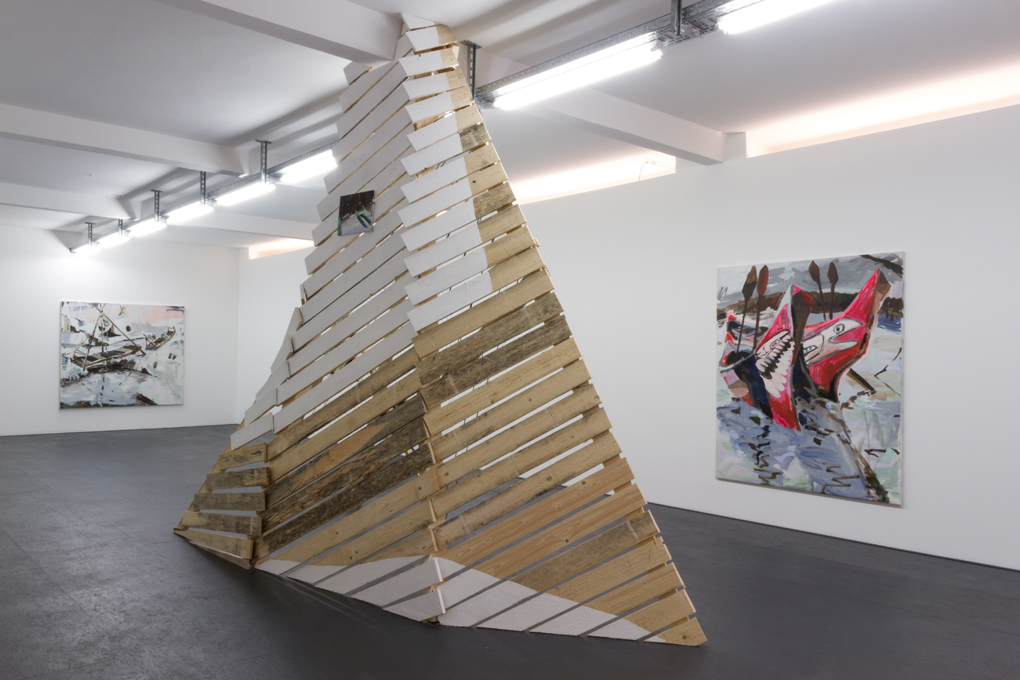 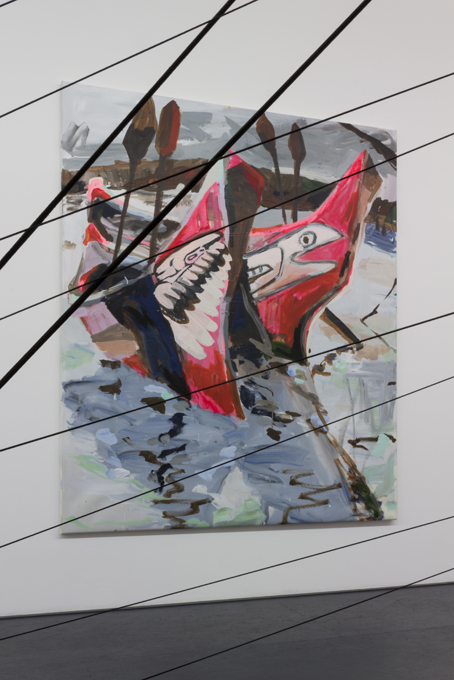 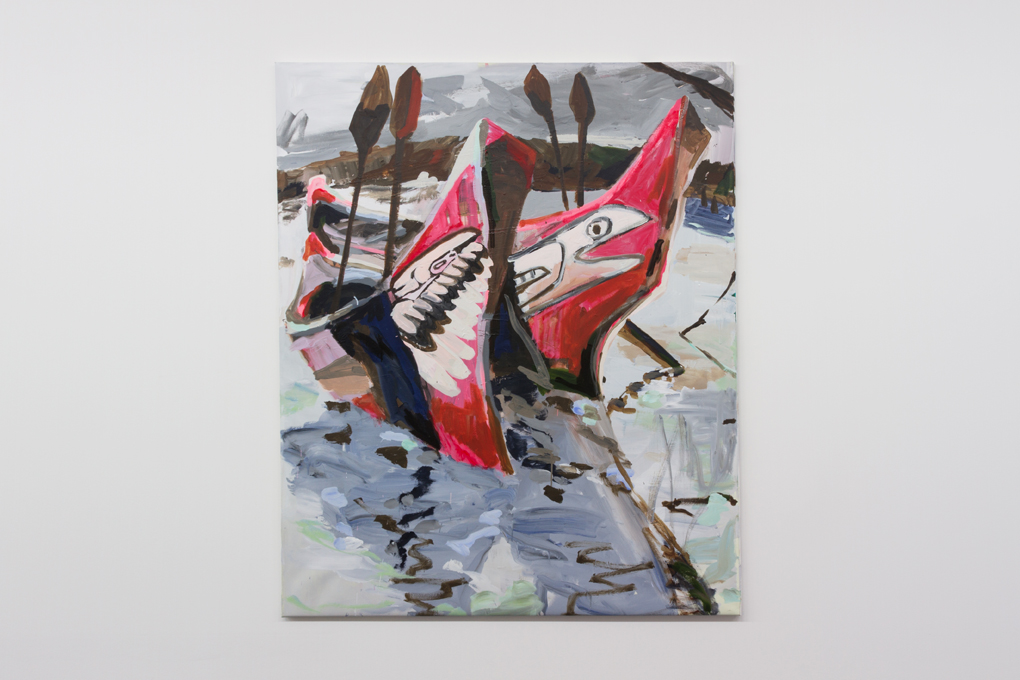 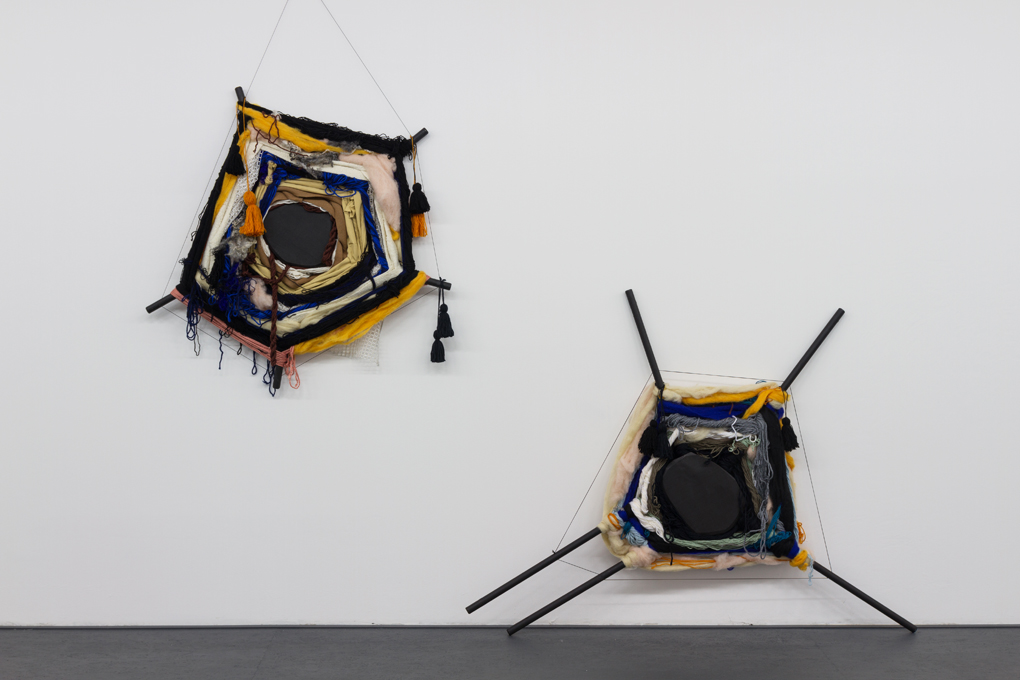 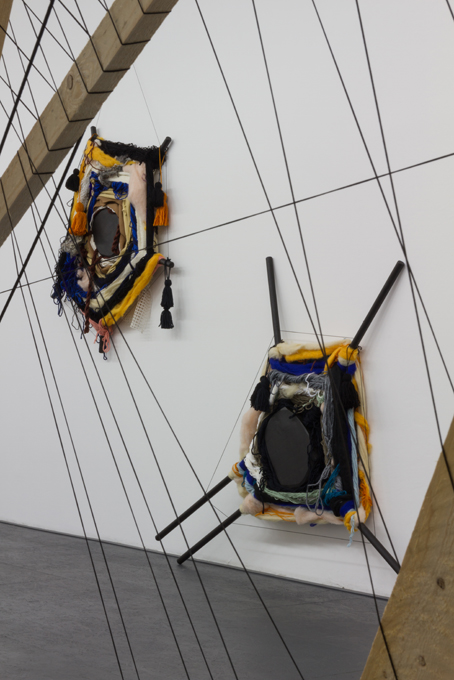 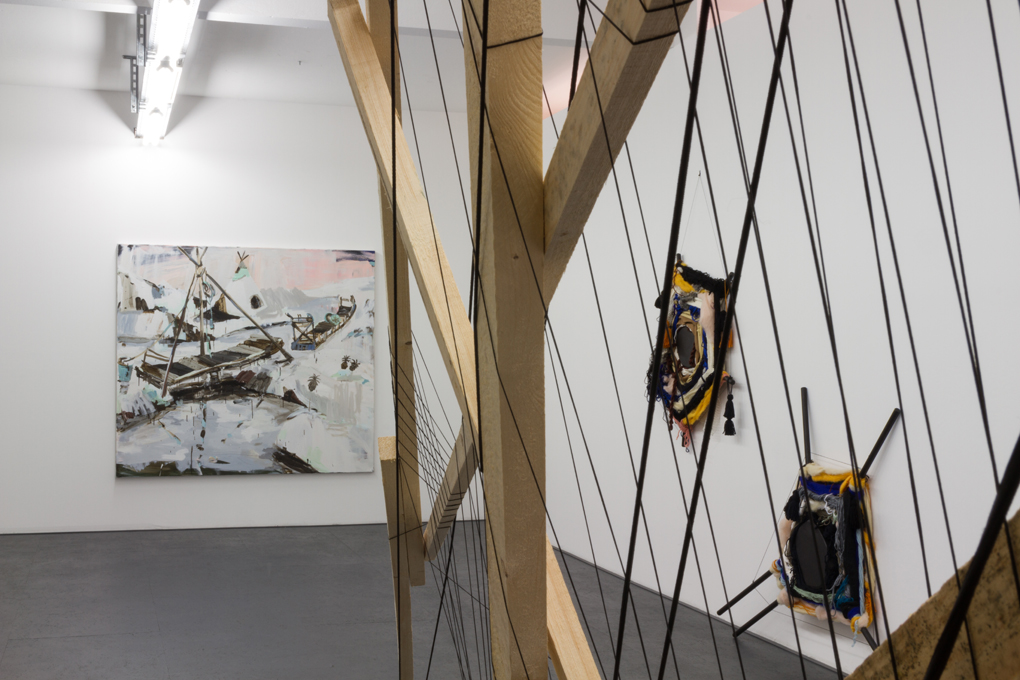 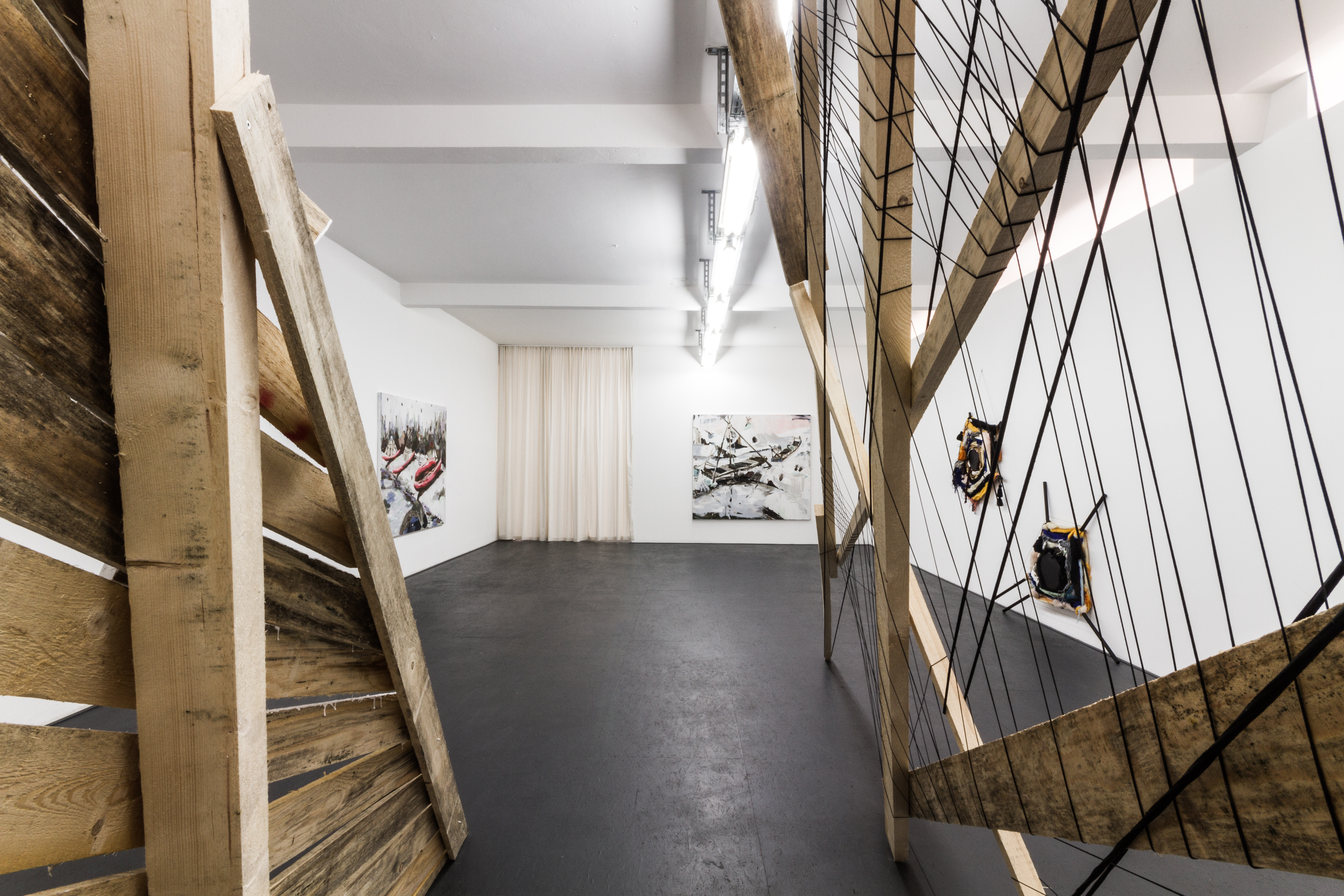 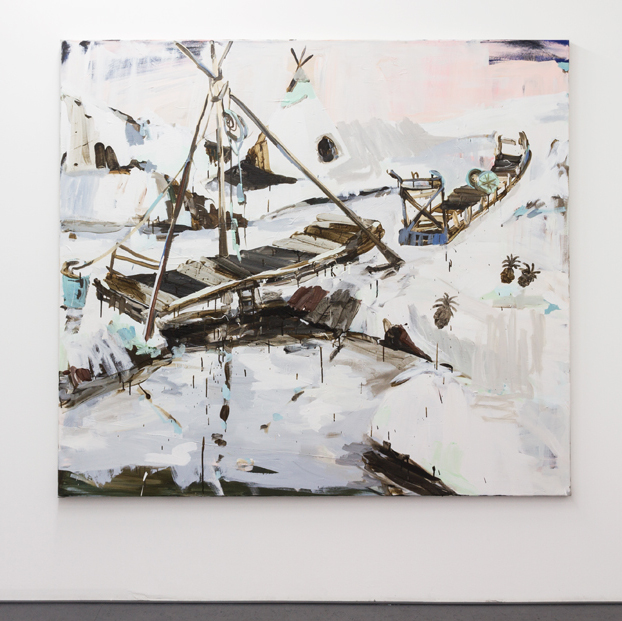 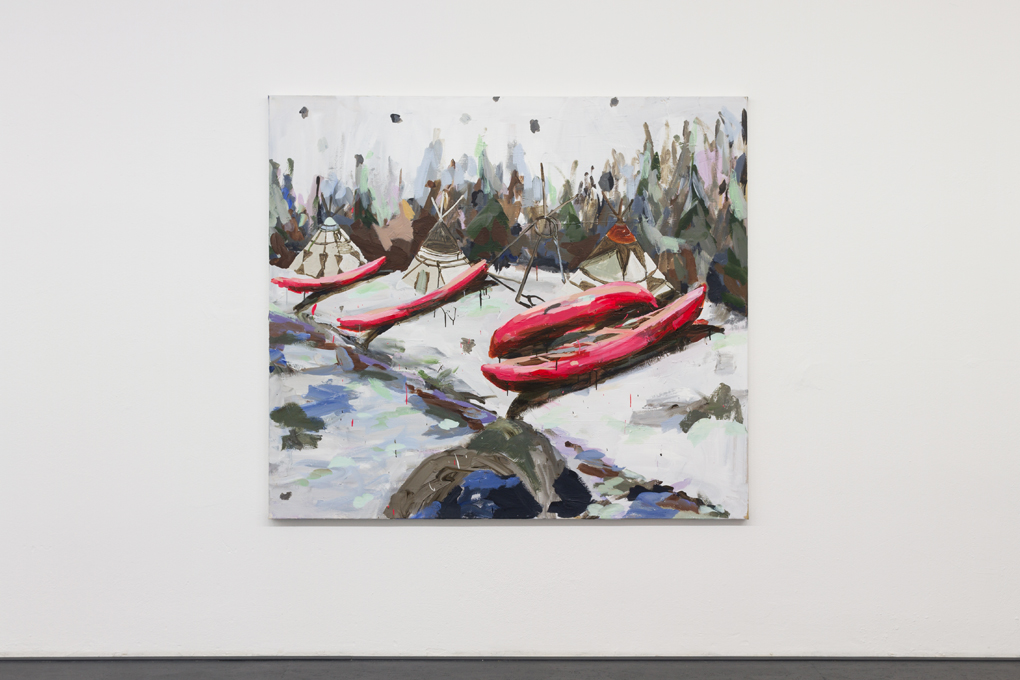 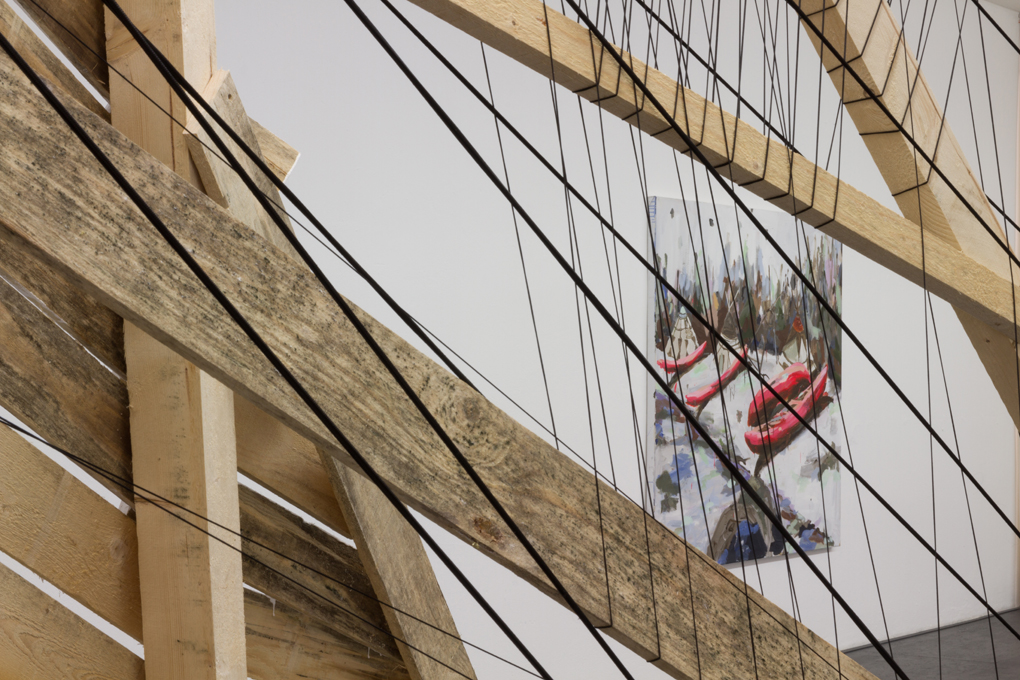 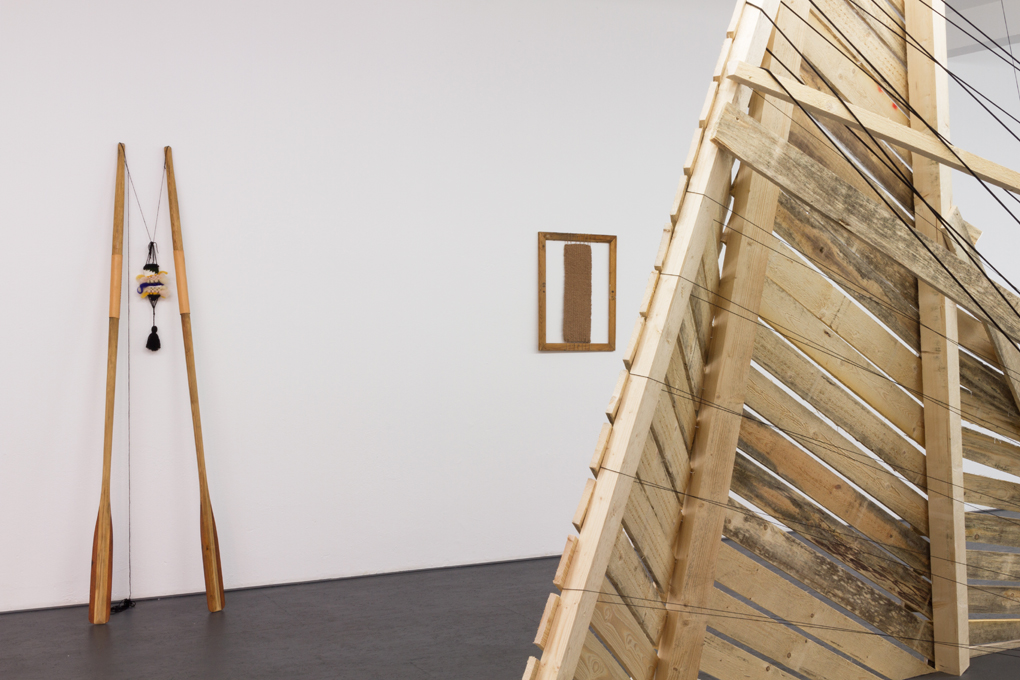 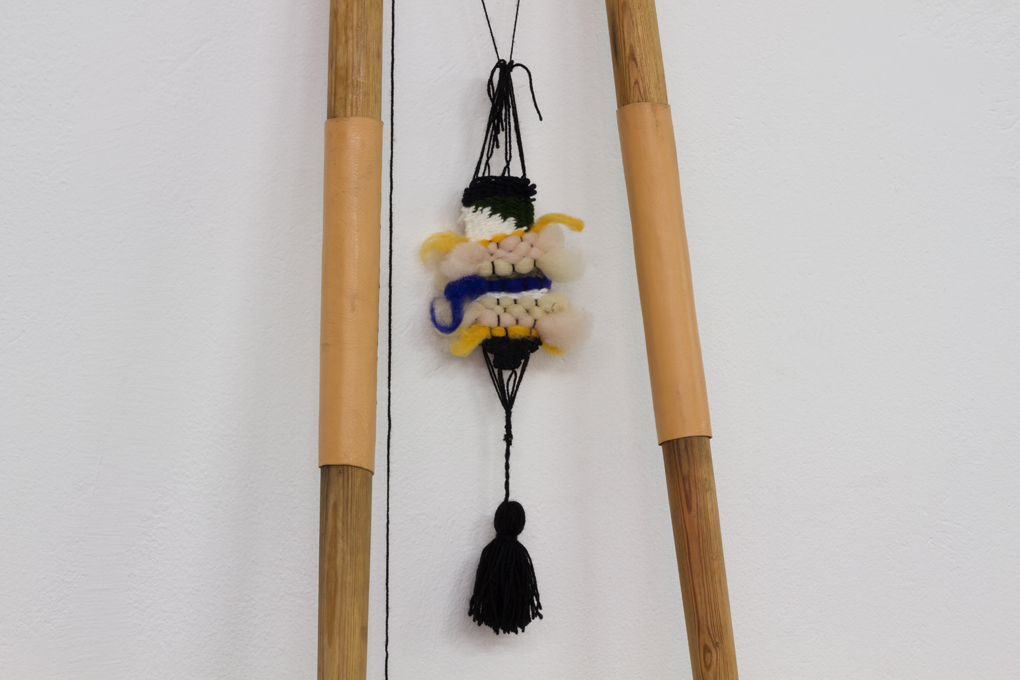 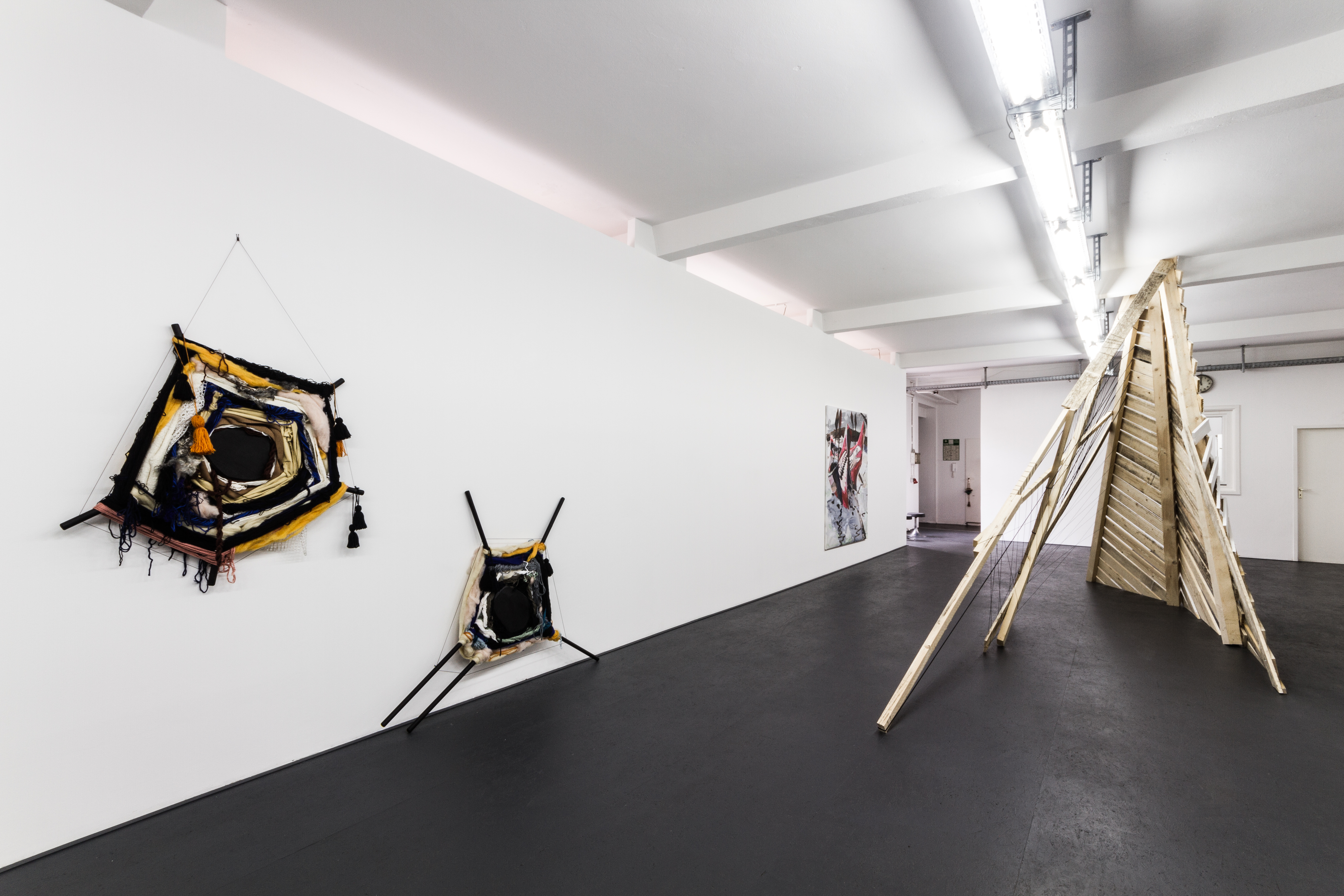 INFO
"NOPLACIA was once my name,
That is, a place where no one goes."

The white colour in the paintings of Mie Olise's *Between the Stratum and the Unstable* is not only used to evoke arctic landscapes covered in snow, but also to make the white spots return to our maps.

The white spots enable us to leave the actual behind and to enter the possible. It sets us in a state of wonder. It is the locus for terra incognita, the geography of utopia.

The word "utopia" is compounded by the Greek words "ou"(non) and "topos"(place) to signify a place that does not exist.

A non-site like utopia cannot be found in the present. It belongs to the past or the future and must therefore be located outside the borders of the actual.

Throughout history utopia has been sought at various places in space as well as in time. Archaeologists have searched for utopia in the ruins of ancient times. Sailors and explorers have searched on distant islands and under the sea.

Utopia has been described in detail by writers and philosophers and has been depicted by artists such as Pieter Bruegel and Hieronymus Bosch, but still it has not been found.

Maybe utopia is not meant to be reached.

Mie Olise does not depict utopia as a final destination, as the end of our journey, but rather as a point of departure for thoughts and imaginations.

*Between the Stratum and the Unstable* is a temporary harbour made of paintings, wooden sculptures and weavings that let distant places and times coincide. It is a harbour that borders to the unknown, where dazzle ships, canoes and pirate ships are being gathered while waiting to continue their journeys.


MIE OLISE (b. 1974, Denmark) currently lives and works between Copenhagen and New York. She obtained her Masters of Fine Arts at Central Saint Martins - School of Art, London and holds a Masters of Architecture from the Aarhus School of Architecture, Denmark. She studied at Skowhegan School of Sculpture and Painting, US and in 2010 she was an Artist in Residence at the International Studio and Curatorial Program (ISCP), New York. Olise has exhibited widely in the US and Europe. She has upcoming solo exhibitions at Samuel Freeman Gallery in Los Angeles and in 2015 at Museo de Arte Acarigua-Araure in Venezuela and will participate in the group show *Bikuben* at the Museum of Contemporary Art, Utah this June. Solo shows include Honor Fraser, LA, Nikolaj Contemporary Art Centre, DK; Skive New Museum of Art, DK; Torrance Art Museum, CA, Philara Sammlung eV, Dusseldorf, Barbara Davis Gallery, Houston, TX and DUVE Berlin. Olise has exhibited at the 10th Istanbul Biennale as well as the Liverpool Biennale, the Athens Video Art Festival and the Damascus Video Art Festival. After her shows in 2009 and 2011, this is Olise’s 3rd solo exhibition at DUVE Berlin.
Die weiße Farbe in den Bildern der Ausstellung *Between the Stratum and the Unstable* von Mie Olise soll nicht nur Schnee bedeckte arktische Landschaften zu evozieren, sondern auch die weißen Fleckenauf unsere Landkarten zurückkehren zu lassen.