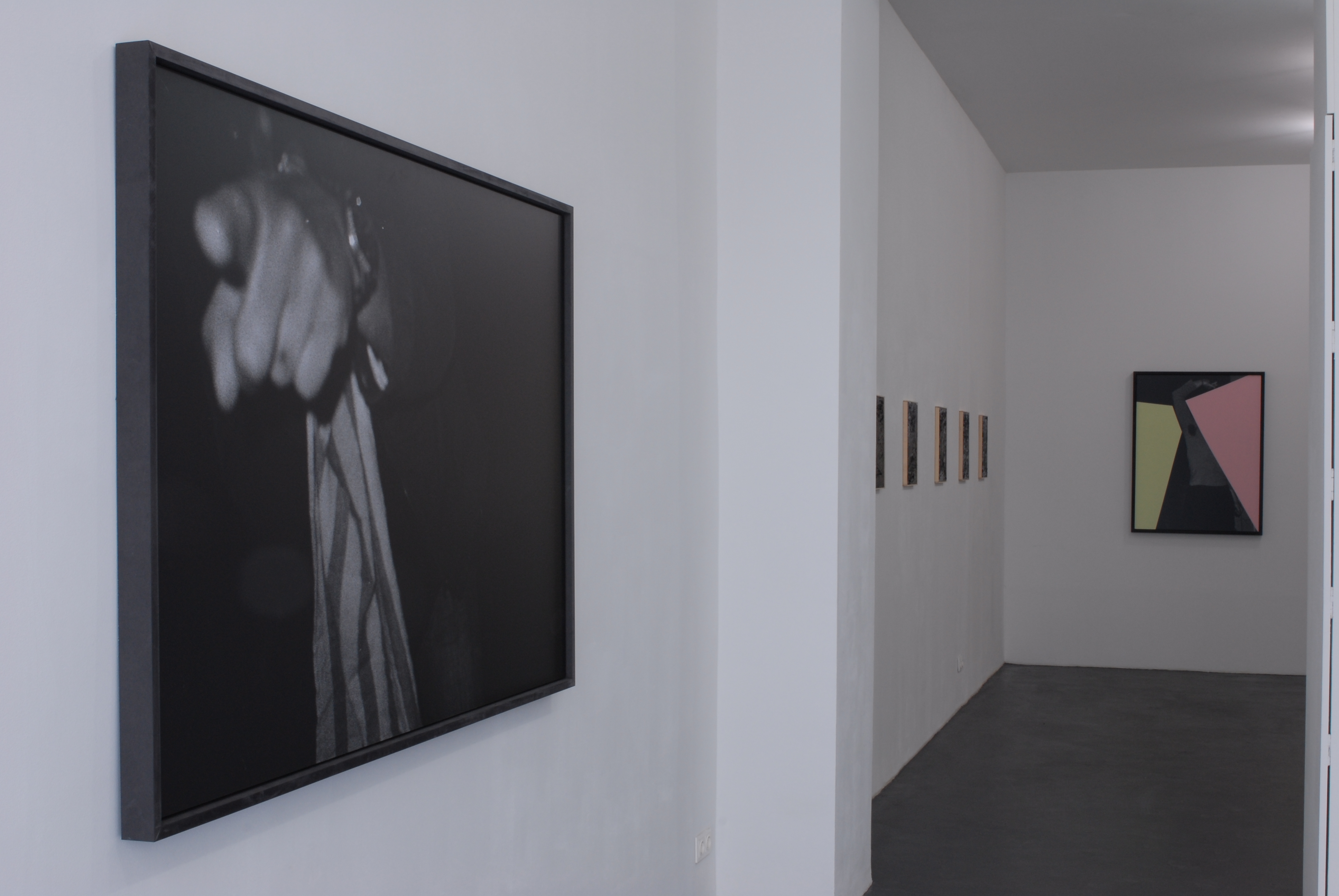 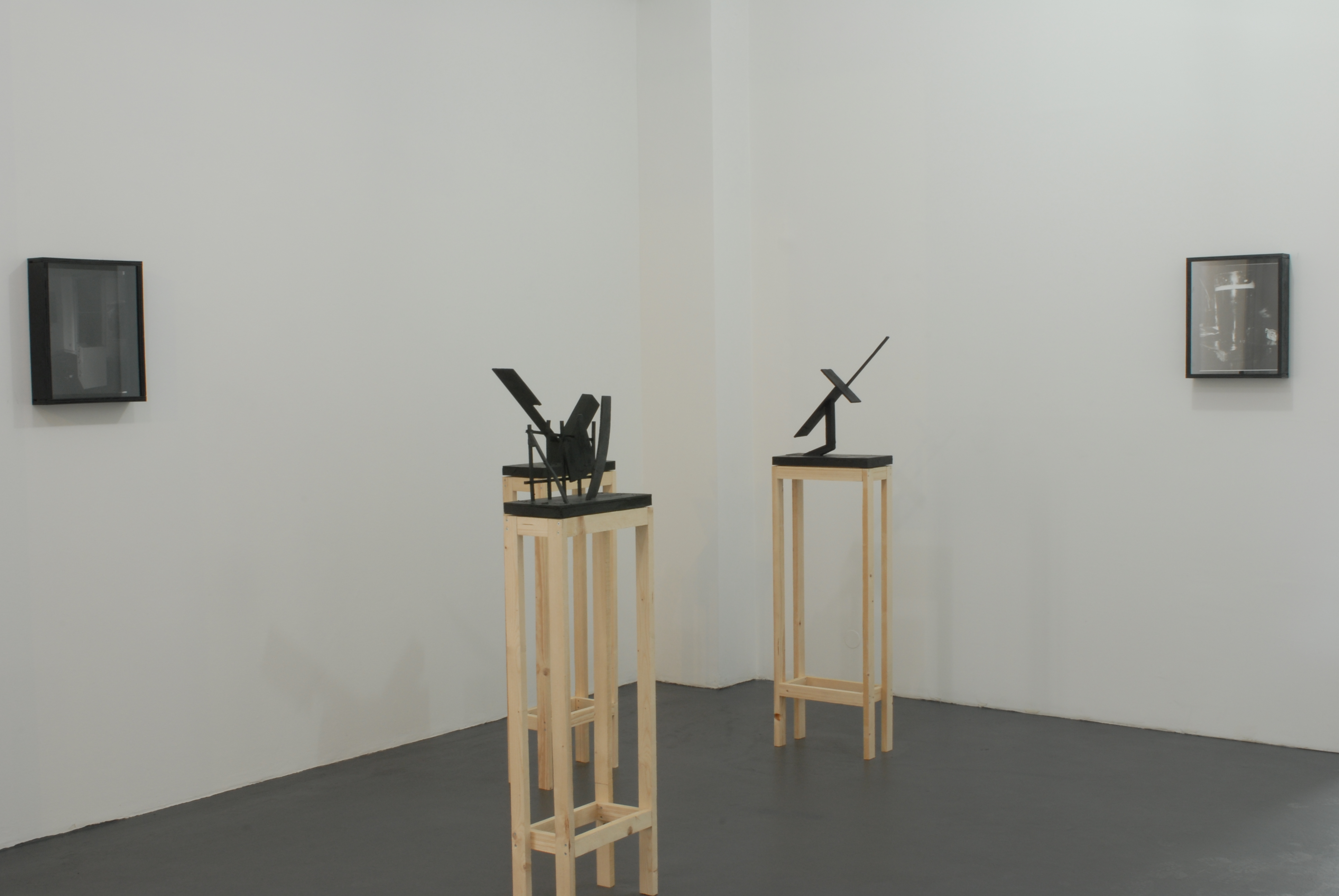 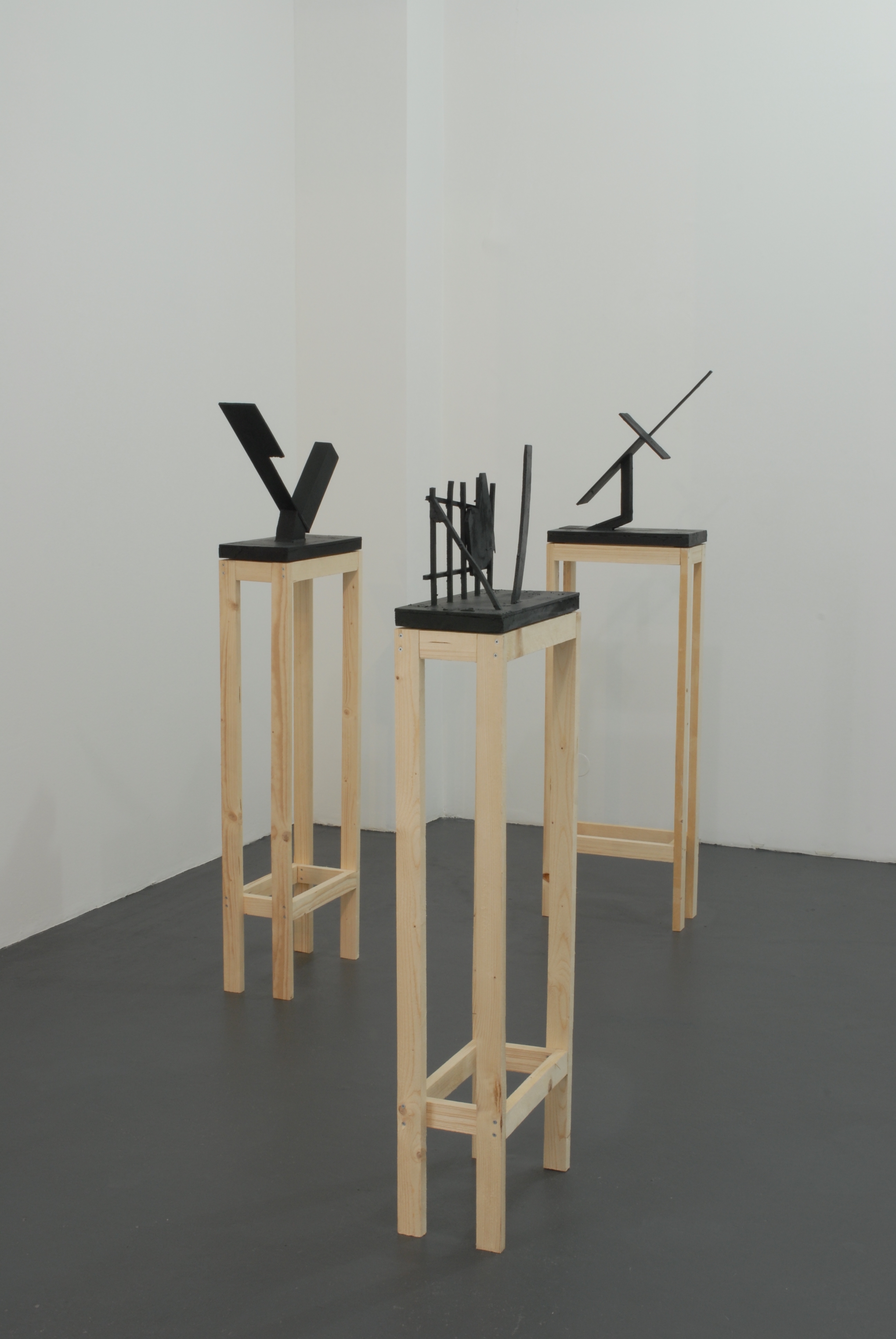 Mounted on a large billboard-like structure that stretches through the entire front room of the gallery, a photographic print forms a powerful prologue to the exhibition. The obfuscation and graininess of the motive - a fist that extends towards the center of the image - is achieved through means of a specific development technique and a particular photo film. This results in a heightened sense of contrast and plasticity, transforming its subject matter into a quasi-sculptural motive. The idea of body language as a plastic code that can be caught, investigated and reworked through material manipulations is present within all of Succo’s photographic works. The typical heavy wooden frames suspend their subjects in a transitional loop between imprisonment and deliberation: being framed, captured and retained by an artistic quest or, quite opposite, allowing simple and spontaneous human gestures to reveal unexpected potential.

Sculptural concerns are central to Succo’s practice and continuously taken advantage of when working two-dimensionally. A new series of oil paintings entitled *Studies for Oil Paintings*, ironically denounces their medium. Yet, these paintings are much more considered then they claim. Despite their effortless and accidental appeal, details are meticulously worked out. Applied in multiple layers and blocky, monochrome brush strokes paint seems sculpted onto it’s support. The oil paintings pair well with the series of spray-painted photographs. These depict scenarios, which are ambiguously located in between snapshot and a calculated staging and then reworked with distilled geometric shapes. The sincere minimalism of geometry, though, is ironically undermined by the absurdity of content and titles.

Like his oil paintings, they communicate the witty formal remarks of a sculptor on painting, combining anecdotal moments of anarchy, irony and aestheticism. Dispersed within the back room of the gallery, the group of black, patinated bronze sculptures takes a sculptural investigation of urban surroundings, temporary architectures and monumental public sculpture at their starting point. Through abstraction and accentuation of simple attributes such as color, shape and posture, Succo directs the attention towards the spirit these plastic objects carry with themselves. His choice of black bronze as principal material bears semblances to modernist monuments creating a haunted, romantic, mysterious power and a sort of failed utopianism: “I am interested in suggesting such an extreme physical presence” the artists explains “because it often reveals it uttermost opposite. I feel that taking a strong and powerful position, allows me to access notions of extreme sensitivity and vulnerability.”
Chris Succo was born 1979 in Düsseldorf. He earned his MA in sculpture from Academy of Fine Arts, Düsseldorf in 2009, where he studied as Meisterschüler with Prof. Georg Herold. Works by the
artists are exhibited internationally and have recently been shown at Fiebach und Minninger, Cologne (with Markus Golz), KIT (Kunst Im Tunnel), Düsseldorf; Museum Kunst-Palast, Düsseldorf, Kunst- und Ausstellungshalle der BRD, Bonn and Märkisches Museum, Witten. Succo has also been granted the renowned EHF fellowship 2010 by the Konrad Adenauer Stiftung and the dHCS Atelierstipendium by Kunstverein Düsseldorf 2009.